"Are you eating it? Or is it eating you?"

Anyone remember The Stuff? It's a bit more obscure, I'll admit, but the message resounds still today that primarily greed rules our food supply. The basic premise is that some miners find this yogurt-y lookin' "stuff" bubbling up from the ground, they taste it and decide it's delicious, then it gets marketed to the general public, who become addicted to it, become zombies, and basically get eaten from the inside out by it, eventually dying.

Now, tell me how creepily familiar this next part sounds...
So, once it's discovered that The Stuff is killing people, and John Q. Public has been warned to dispose of his stash, the food industry starts experimenting with using smaller amounts of The Stuff inside regular ice cream so that they can keep the buyers addicted,and keep making money on it, but hopefully not have the customers get eaten from the inside out, at least not fast enough to have The Stuff be blamed for it.

Now let me just step down off of my soap box, brush myself off and get composed...
Ah, there we go. Let's get down to my very edible, healthy, and non-addictive (at least not in the "bad" way) version of The Stuff.
The Stuff in the film is white, but who wants to eat white puddin', I ask you? So, mine is chocolate. I threw coconut shavings on top for some white effect. So there. 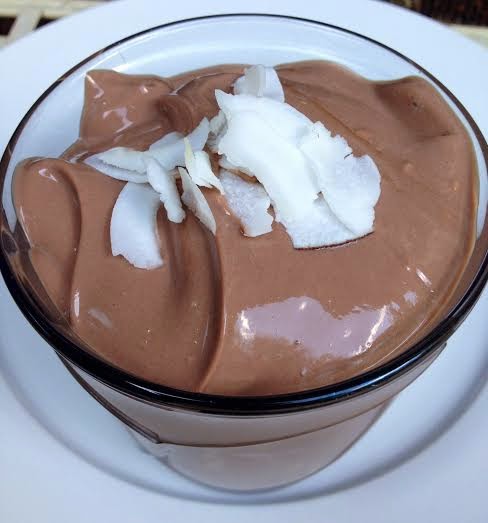 This is an even simpler version of the Vegan Chocolate Mousse we all know and love. You know, the one where you melt chocolate chips down and combine them with non-dairy milk and sugar and tofu. But, frankly, when I'm really craving chocolate, I'm also usually in a brain-state that dictates, "You are too tired and bitchy to wait for chocolate to melt!" That's where The Stuff comes in. It's just powdered cocoa, silken tofu (hell, I don't even drain it), your choice of liquid sweetener, and a touch of vanilla. And it's awesome! 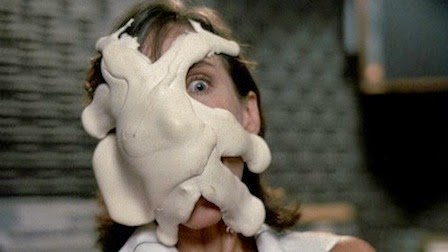 I've never seen that movie but I'm intrigued. I might just have to find it and watch it. I'm also excited to try your pudding. So simple to make and looks delicious!

I haven't seen the movie, but it looks really interesting. I will try and check it out! :)

your stuff looks like good stuff not creepy gloop eating people up!

I loved that movie when I was a kid--I always assumed the Stuff was basically marshmallow fluff. But I like the sound of your chocolaty recipe better!

This is such an awesome theme, by the way!

Love this idea! Will definitely try this next time I need a chocolate fix. :)