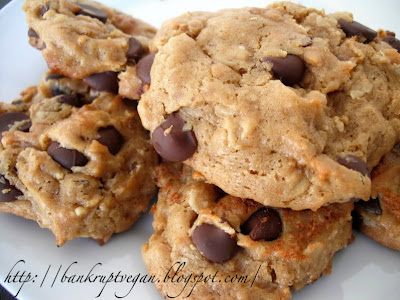 I was a theatre major in college. Big surprise! Look, I even spell "theatre" in the drama-snoot British way, even though I've never been anywhere near England in my life. Well, back in my theatre days, we used to joke around during auditions about the dreaded "triple threat" auditionee, that special scene-stealer who could sing, dance, and act. When I made these cookies, they were so good, they reminded me of a triple threat. Let me explain...
These chocolate chip cookies are "triple threats" in two ways. Firstly, they are vegan, gluten-free, and free of refined sugar (depending on the type of chocolate chip you use). And, secondly, they contain peanut butter, chocolate, and oatmeal. YOWZA! So, they're like double triple threats!
I adapted these from the New Dawn Kitchen: Gluten-Free, Vegan, and (easily) Sugar-Free Desserts

cookbook. The only thing I did different from the recipe was that I used maple syrup

instead of brown sweetener and I adjusted my cooking time to a couple of minutes less than the author's suggestion. My first batch was a little dark, and I tend to like 'em kinda smushy.

waitress, i will take a dozen :!

Courtney
PS I started out a theater major too, and I always hated those "triple threat" people, lol!

My mouth is watering! Yum!

Definitely have to make these!! Thanks :)