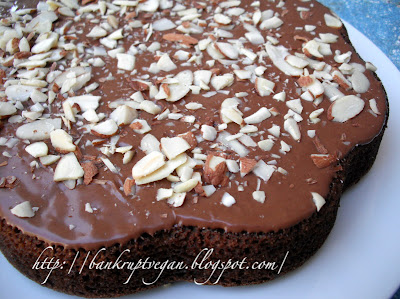 You guys know I struggle with weight issues. In fact, I almost named this blog, "The Chunky Vegan," but then I chose not to because I thought I might someday not be chunky anymore. *fingers crossed* Hopefully someday the "bankrupt" moniker will also not apply. *fingers double crossed*
Anyway, I recently snagged a copy of Neal Barnard's new book 21-Day Weight Loss Kickstart. It's chock full of great information for losing weight, and all of the recipes are 100% vegan! Since I am forever craving chocolate and sugar, the first recipe I turned to was this easy chocolate cake. It's honestly not the greatest cake I have ever baked, but the advantage was that it was really easy to throw together, it's low in fat and calories, and it tastes great with fresh coffee or a tall, cold glass of vanilla soymilk.
The recipe is specifically just for the cake. The topping is all mine. I threw together a simple glaze with about a cup of sifted powdered sugar, a couple of tablespoons of sifted powdered cocoa, and enough soymilk to make it juicy (just a few teaspoons will do - add the milk one teaspoon at a time until you get the consistency you want) and topped that with some slivered almonds, which I had to painstakingly pick off one by one because my three-year-old daughter did NOT want them on the cake.


WACKY CHOCOLATE CAKE
Recipe from Alka Chandna
Makes 9 3x3" pieces.
"Here is a delightful version of legendary Wacky Cake, which is said to have its origins in World War II rationing, when milk and eggs were hard to come by. At the time, the cake was lower in fat and cholesterol, not by choice but by necessity. Today, those characteristics are virtues.
1 1/2 cups unbleached pastry flour
3/4 cup sugar
1/2 teaspoon salt
1 1/2 teaspoons baking soda
3 tablespoons cocoa powder
2 teaspoons vanilla extract
5 teaspoons unsweetened applesauce
1 tablespoon vinegar
1 cup cold water
Instructions: Preheat the oven to 350 degrees F. Combine the flour, sugar, salt, baking soda, and cocoa powder in a bowl; stir with a fork until mixed. In a separate bowl, whisk the vanilla, applesauce, vinegar, and water. Pour the mixed wet ingredients into the dry ingredients. Stir with a fork until well mixed. Pour into a 9x9" baking dish and bake for 30 minutes, until toothpick inserted in the center comes out clean."
NUTRITION INFO (per serving):
Calories: 171 / Total Fat: 2g / Total Carbohydrates: 36g (Dietary Fiber: 1g, Sugar: 18g) / Sodium: 343mg / Protein: 2g
Have Your Cake and Vegan Too

Lookin' good! Ohh! Great cake! I love to try that! Can't wait to try this recipe. I'll make these for my mom and my brothers and sister. They will be so happy about this.