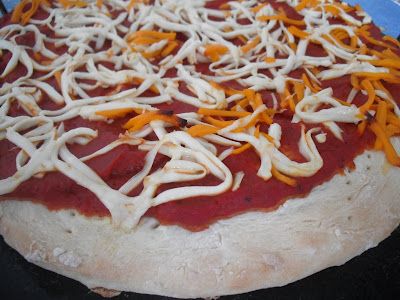 We love pizza around here, and when it doesn't come vegan-style from the local parlor (seriously, when are the big chains going to catch on to this?!) you have to find new-fashioned ways of doing it the "old-fashioned way." As you know, bread is Jason's thing and he's found a great basic recipe for any homemade pie. Here's how he does it...

1 C warm (hot, but not boiling) water
1 T active dry yeast
2 1/2 C all purpose flour,  with 1/2 C separated
(we tried making this with all whole wheat flour and it turned out great, so if you're watching your intake of the white stuff, feel free to substitute)

1 T salt
1 T sugar (or preferred sweetener - we use agave when we have it)
Vegan Italiano: Meat-free, Egg-free, Dairy-free Dishes from Sun-Drenched Italy

maybe a minute at the end under the broiler would get the vegan cheese to semi-melt...