For any poor vegan, a salvage grocery store is going to be your bread and butter (so to speak). Organic and prepared foods are incredibly expensive at the grocery store and can often not be afforded from week to week. However, if you have access to a salvage store, please take advantage of it! They generally do not have websites, but if you do some hard digging in your phone book or on the internet, and do a lot of asking around, you are bound to find one in or near your area.

Salvage groceries feature damaged or dented cans, and expired goods, as well as stuff from grocers who have gone out of business, excess inventory purchased by liquidators then auctioned off, misspelled labels, stuff like that, all at a super cheap price. It's always a hodgepodge of items, and the inventory rarely stays the same. But that's a great thing because I have tried some neat vegan stuff purchased at a super low price that I would not have dared pay full price for, on the off chance that it might be gross and I would have paid way too much for it.

I took a trip to our local salvage store last week and found tons of awesome deals! I walked out of the store, my cart brimming over with seven or eight paper sacks full of stuff, for less than thirty dollars.

Here are just a few of my favorite finds from the last trip... 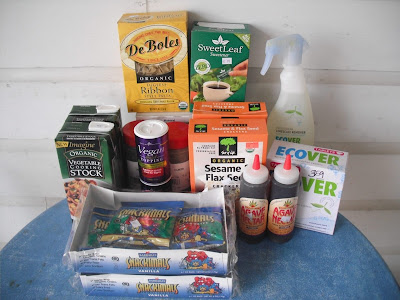 As you can see, I scored some agave at $1.99 a bottle (they're $3.99 each at the health food store), some organic veggie stock at 99 cents per box, some Ecover cleaning supplies (including laundry powder, not pictured), organic eggless noodles at 99 cents, and whole boxes of Snackimals cookies for my daughter at only 89 cents per box. Each box contains 6 bags of cookies. At the grocery store, just one little bag of cookies is 99 cents all by itself! I also got the Vegan "parmesan" grated topping as a treat because I've never tried it, and I'm glad I did because it's really good. I've had it on noodles and rice, and I can't wait to try it on popcorn.
I also got a six gorgeous acorn squash for 29 cents a pound. I'm going to roast them, then drizzle them with agave and walnuts and broil for a few minutes. They will be so delicious. I'll post a picture when I make them.
And BEST OF ALL, I snagged nine boxes of Mori-Nu Extra Firm Silken Tofu at just 50 cents each! Yay! There will be mousse and pudding and extra creamy "nooch" casserole all month long!

Here are a couple of websites that may help you locate a salvage store in your area:
Good luck!

Email ThisBlogThis!Share to TwitterShare to FacebookShare to Pinterest
THE COOKBOOK money-saving tips

Is this the place that is out in Cleburne? ONe of my bff's goes there to get all kinds of dinted organic foodies for pennies. Kroger sometimes purges their healthy section and I have bought all kinds of beauty and food product that were organic and/or animal free for more than 1/2 of originally mark. My kind of deal!

Wow I've never heard of such a place. I guess I better open up the phone book to see if we have anything like this out here.