"May I Be Frank" is, Frankly, Amazing 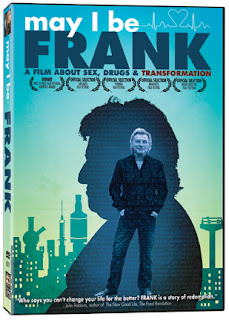 I was recently contacted by an employee of Cinema Libra Studio and asked to review a copy of their film, May I Be Frank. I was vaguely familiar with the title of the film, and the Frank in question, because I'd just seen the documentary Hungry for Change, in which Frank is featured, a couple of weeks ago.
As a result of being moved by Frank (who gives a brief but tearful account of his transformation in May I Be Frank) in Hungry for Change, I fortuitously found a copy of May I Be Frank available to HuluPlus viewers. I don't have cable TV and I am a HuluPlus fanatic! I immediately placed the film in my queue. Then, I kid you not, the very next day I received the email asking me to review it. Looks like it was meant to be, yes?

This morning my husband and I sat down to watch the film, thinking we could take it in 15 to 30 minute snippets throughout the day, watching while we snack during breaks between weekend chores. But it only took about 10 minutes to get us hooked, and we could not stop watching for anything. It was brilliant and fascinating, and the title character, Frank, is instantly recognizable by the viewer as being a reflection of oneself, and society at large. He is brash and funny on the outside, and (like many of us) uses hedonism as a defense against his own self-loathing. Even being a Southern woman, I found that I easily identified with this loudmouth Sicilian guy from Brooklyn. I recognized quickly that there is a "Frank" in all of us - someone who desperately craves healing, who wants to be loved, who wants to find health, happiness, and peace. I am already finding myself asking, "What would my inner Frank say to this?" And I will probably use that as a mantra to combat bad decisions in the future! WWFD?

The basic premise of the film is that this overweight, ex-junkie with hepC named Frank casually wanders into a raw vegan restaurant in San Francisco called Cafe Gratitude, where he befriends three young guys who work there. These three guys, with the help of the restaurant's owner, challenge Frank to 42 days of their health and spiritual coaching, as well as eating three meals a day at Cafe Gratitude, and drinking a gallon of water a day. He complies, signs a contract, and begins a journey that will change his life forever.

It all starts out with the diet changes, as a viewer might expect. And, at first, I thought it was going to be another one of those "veganism is the only answer" documentaries. Don't get me wrong - I love those documentaries! And I do affirm, after many years of struggle, that veganism is the answer. But, thanks to this film, I now also understand that a healthy, plant-based diet is only the beginning of healing.
Once Frank's body begins to heal itself, his mind and emotions all begin reaching out for help as well. His body, in releasing the toxins gathered and stored through 54 years of abuse, also finds the strength to release its emotional toxins. It is truly, truly inspiring. I couldn't help but question my own psychological baggage while watching Frank set his down, open it up, and sort it all out right in my living room. I was moved to tears more than once. Frank's energy and his emotions become so raw and palpable that you feel like you're right there in the room with him, watching all of this amazing stuff happen to him like a fly on the wall, wanting to speak to him directly, but unable to.

I cannot recommend strongly enough that you watch this film. Even if you think you've got it all figured out, there is still something profound to be learned from Frank. His documented journey is having a domino effect with viewers everywhere, I'm certain, as it has with me. Frank changed his life, and now he has inspired me to go even further and deeper into changing mine, creating and revelling in my own transformation.

SEE IT FOR YOURSELF!


The folks at Cinema Libre Studio have graciously offered up two copies of the May I Be Frank DVD to be given away on Bankrupt Vegan. How fabulous is that? To enter, follow the prompts in the Rafflecopter widget below.

Email ThisBlogThis!Share to TwitterShare to FacebookShare to Pinterest
THE COOKBOOK giveaways, inspiration, reviews

I'd like to become more courageous about achieving my goals. The film sounds fabulous! Many thanks!

I would like to transform the way that I see the world... I want to be more hopeful about earth's future.

I would love to start doing yoga and find inner peace :)

I want to lose weight but by following a plant based diet and eating a healthy diet with lots of vegetables and whole grains.

Like many, a change of pace to gain a better perspective of life and things that surround me everyday, would be a definite goal to strive for. I hope
to be able to win this DVD so I can be enlightened.

I've been wanting to see this movie forever, and I totally forgot about it. Thanks for the reminder!

See...I looked at the trailer...and being from Brooklyn, I have to say there are alot of Franks there (foul-mouthed, but nice guys...). However, what made me sad was finding out he'd gained all of his weight back, tried to commit suicide, took the weight back off...and...truly doesn't seem happy. That's not to say veganism is wrong; I am one! But, Frank was/may still be/ looking for his life to just be 'wonderful' and for me that takes faith in God. Because life is still crappy (Boston marathon bombing sh**); Hopefully Frank is dealing with "his" issues that drove him to the unhealth he had in the first place. So...I am just not that inspired with this.

I would really like to see this movie. I read about Frank a couple months ago, and I would like to see more.